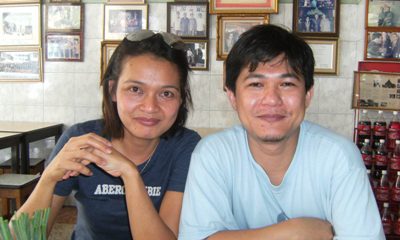 Have a dream?  A vision of what could be, if only…?  Do you have a vision of something greater to come, which you passionately long for?  This past Saturday  night, on what was as much a holiday weekend in Thailand as it was in the U.S., a visionary, passionate Christian leader taught me a priceless lesson about how God brings vision to reality.  Here’s how I described it, straight out of my journal.

Saturday night Dui and his wife Gift invited us to join them for what he called a home Bible study.  Pastor Preecha and Nit joined us as well.  When the van came to pick us up, it was already loaded with an army of others – Dui’s father and stepmother, brother and sister-in-law, and a couple of kids.  As we made our way, we stopped at a roadside chicken roaster’s stand, where a woman had five cooked chickens on a rotissarie.  Gift picked the best looking one, the middle one, and the lady whacked it off and gave it to her.  That, Dui said, was going to be our dinner.

We traveled the highway, then down a very bumpy dirt road (it was the tail end of rainy season), then stopped again at a collection of homes.  Dui said this is where Gift grew up, and her family emerged, each hauling pots of rice, meats, and other food.  This wasn’t just roadside chicken; we were destined for pot luck, Thai style.

Just before we got to the destination, Dui pointed out an old abandoned church building on the right.  He said that the missionaries had come years earlier and established it, but when support ran out (or when the church died out), it was abandoned.  His dream is to make this home Bible study big enough, to reestablish a church there, on that site.  He is praying that God would send a leader there to move it forward.

This group meets every Saturday night in the village of Nhongnea, at the home of a lady named Sohmkit.  She’s a pig farmer.  This hasn’t been a particularly good year for pig farming, but Sohmkit is tough.  She has survived life with a mean alcoholic husband and has moved on.  She has forged a beautiful home, including a lovely covered picnic area that she built herself.  By the time everyone arrived, more than 25 people were there.  Granted, many came from Bangkok with Dui, but they’re all there to fellowship around the table, then to worship and study God’s word. One of the people we met was Baam.  She had an amazing testimony.  As she sat next to Robin, she shared that she was illiterate.  But as she became a believer, the cried out to God for the ability to understand His word.  With no training or education of any kind, God answered her prayer and gave her the ability to read and understand His word in Thai.  Nothing else, mind you!  Just the Bible.  But she can read it, and can memorize extraordinarily long passages so she can meditate on them later.

After a great meal, Dui took his guitar and led in worship.  The singing was raw, but as heartfelt as anything I have seen anywhere else among people who love God.

Dui taught on 1 John 3:16-24, about loving our neighbor.  It was a verse-by-verse exposition.  Then he gave every adult there – everyone – an opportunity to interact with what he just had taught.  He actually went around the circle and asked people their thoughts.  Some asked questions, like the young woman who remarked that she didn’t understand how to love strangers – especially when she had been greatly hurt once by a stranger.  Dui answered – always from scripture.  Others shared how difficult it is to think of loving an enemy or an abusive husband.  Others expressed their gratitude to God.  A couple of nonbelievers were there, and their thoughts were welcomed as well.  And Dui beautifully interacted with them, always pointing back to scriptural truth.

Nobody but my very jet-lagged eyelids was in a hurry to leave.  Everybody had their say; I only wish I knew all of what they were saying.  But when we left, I was convinced that everybody had been fed, accepted for where they were in their spiritual journey, and had an opportunity (and responsibility) to contribute to the group.  A Bible study group perhaps; but with all the makings of the core of a church.

Yet, my excitement and typical “let’s hurry this thing up” style collided mildly with their relaxed, patient wait for the Lord to provide.  They need a pastor for this area.  They need a few more people.  I’m sure they need resources.

Who owns the building, I asked. Sohmkit, they replied.  The hostess/pig farmer.

And did they have a timetable?  Yes, Gift said.  About six months.  But they are waiting for God to provide.

Until then, six months or otherwise, every Saturday night, Dui and Gift, along with their families and others, will continue to drive from Bangkok to Nhongnea, where they will meet, worship, dig into God’s word, interact with it at whatever spiritual point they find themselves, and love another in the process.  In other words, until they HAVE a church, they’ll “settle” for BEING the church.

The lesson:  If you want to see a vision become reality, start practicing as if it already has.  Give legs to your dreams – in His time, God will give them wings.